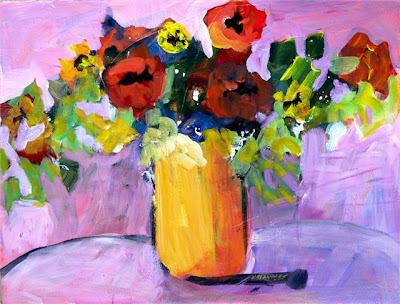 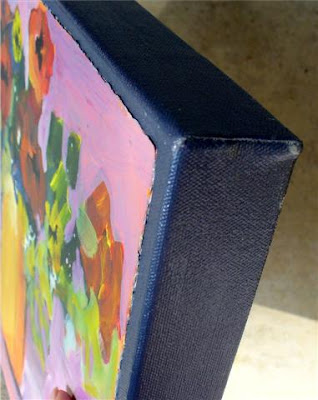 12"x16" Acrylic on watercolor paper on gallery wrapped canvas 1 1/2" profile
No flowers were harmed in the making of this painting. They came from my flower imagination. Each spring I have always loved shopping the seed packets and seeing the Oriental Poppies and I'd buy a package just to have. I love the genus name of Papaver. But poppies can generate a multitude of memories.
Here is more information on the poppy that I found at Answers.com.
pop·py (pŏp'ē)

Besides symbolizing sleep and unconsciousness, poppies were also associated with death, and already at the time of Waterloo it was said that those growing on the battlefield had sprung from the blood of soldiers (Dyer, 1889: 115). This symbolism was taken up during and after the First World War; in the period leading up to Armistice Day and Remembrance Sunday (11 November, and the Sunday nearest to it) they are widely worn as lapel badges, and wreaths of them laid at memorials for the dead of all recent wars.

Country beliefs about poppies were chiefly warnings: to pick or sniff them supposedly caused headaches, earache, blindness, warts, or a strong possibility of being struck by lightning. The purpose may have been to stop children trampling the corn in order to pick flowers (Vickery, 1995: 286-90).

Disturbing and alarming news on the poppy front from Strannix blog and he reports that Afghanistan will produce another record poppy harvest this year that cements its status as the world's near-sole supplier of the heroin source and that the country now accounts for 95 percent of the world's crop. Good news for dealers and junkies.
Another report from Matthew Lee mentions that almost all the heroin from Afghanistan makes its way to Europe; most of the heroin in the U.S. comes from Latin America.

The poppy has been the symbol of the dead and of sleep since antiquity. The poppies of “ fields” are celebrated in a poem by John McCrae and are the Memorial Day emblem of World War veterans. The poem can be viewed on Tom's MySpace . In Fields" is one of the most famous poems about World War I, and has been called "The most popular poem" produced by the war. Green Fields of France - Memorial Video
is a must see with a beautiful song with the lines "The warm summer breeze makes the red poppies dance"

An interesting tidbit is the false positive drug tests when ingesting small amounts of the seeds. Although the drug opium is produced by "milking" latex from the unripe fruits ("seed pods") rather than from the seeds, all parts of the plant can contain or carry the opium alkaloids, especially morphine and codeine. This means that eating foods (e.g., muffins) that contain poppy seeds can result in a false positive for opiates in a drug test.

I hope you enjoy this poppy painting about dancing poppies. For a wonderful poppy seed dressing recipe check out the Artist Food Network.

Preview | Powered by FeedBlitz
Posted by Nancy Standlee at 7:00 AM

Nancy, you have the most interesting posts. "In Flanders Field" is timely as we remember our fallen soldiers and those who are in danger every day. It seems to never end. God bless them all, and their families who serve right along with them.

Nice painting, too. I like the way it looks attached to the canvas this way. 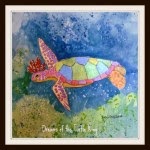 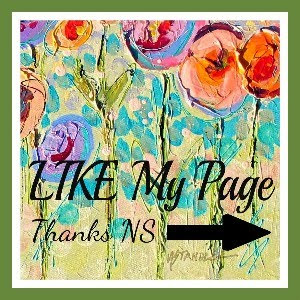